Hey Amos. Thanks for doing this Interview.

Sure, no problem. I don't have that much to say anyway.

You've been following the German graffiti scene for almost 20 years now. What does graffiti mean to you at this point?

Graffiti still determines a part of my day. I like looking at legal graffiti in the streets, especially in Berlin-Rummelsburg, Pankow, etc., and in Hamburg-Altona; also St. Pauli, or Copenhagen-Sudhavn (R.I.P). They have incredibly elaborate, eclectic commissioned works there, but also super dope Hall of Fame burners. Me, I don't have the patience or the time (nor the skills, probably) to do that. I still like illegal graffiti (especially train writing) best. But since I don't know when or where to go to look at that, I often use electronic media or magazines.

How do you view Streetfiles' rise and fall?

I am less-informed now (but i don't miss that website. I think, or hope, that people will go out more again and check out stuff in the streets themselves, or TRAVEL MORE, but that's kinda unrealistic)... In any case, soon there will probably be someone else to pick up that idea and reconsolidate it.

What do you make of graffiti's 'career'?

First off, I have to say that I have no global overview of graffiti. Others know way more than I do about what's going on. Neither do I really know what went on in pre-1990s Sweden, Switzerland or Denmark. Not to mention old school Italian stuff. New York and Los Angeles have been covered pretty well; that can be read up on easily. Other than that, all is hazy (even though electronic media will keep you totally informed, you could spend weeks online! R.I.P. Streetfiles, haha). At least I now know that there's an Amos in Nuremberg, or that these guys in Shanghai have been doing subways. Also, it's very hard to know how a city or a foreign country is developing if you're not living there (I mean, there are major differences between Madrid and Moscow). And it's incredible how some places have completely gone to sleep, graff-wise. For instance, Zurich was still really happening in 1994. Btw, I really enjoyed the Buenos Aires-feature you ran. Very cool. Furthermore, the difference between 'legal' and 'illegal'. Looking at Mid-European illegals, I'm amazed by how styles keep changing (they've developed in the sense that they've gone from Odem-Wildstyle-Alphabets to thoroughly proportional Dortmund-style simple bombing, doing away with 3Ds, and so on. I wonder if there's a new word for that already?). Especially the Eastern Bloc is making huge strides. At the end of the day, I believe that there's a limit to the creativity in illegal graff. Still, I am impressed time and again by wholecars by Fino, Utop Crew, Moas, MRN... Neu, Moses, Taps, Bild, E2Es by Derick&Senjor, Bro-CMR, etc. There are also many bombers/crews, whose styles have fascinated me for decades, e.g. Horfe, Kripoe, Hor-Snow, BAD, OBS, DRM, DSF, AK47, Mutants, Tish, Satschjem, etc. A general conclusion could be to say that elaborate works are becoming more rare (but the things that do get done are milestones, quality-wise). After all, the guys and gals today do have less time. Hahaha, that's why there are ultra-high-pressure cans that are empty in 30 seconds, so can get to the party on time.

Graff-wise, what would you do again today?

Get busted, hahahaha. I don't give a fuck!

It's a place where a couple of professional, cool people (both illegal and legal), who all love to travel... and I love that city. The scene's dynamic is what I'd desclare a rather "comatose state".

You said that you can't take a global perspective. Where have you been so far?

In Europe, everywhere, except Albania, Montenegro, Belarus, and Moldavia = fucking sucked, and in Turkey, on the Asian side hehehe.

I can't boil that down to a single vacation or event. I liked Iceland, because you get to paint surrounded by nature, and it was difficult getting a hold of some spray paint. Italy, because people there really don't care. Ukraine, because it's just totally fucked up. Southern France and Slovakia, because the guys there have been very nice and open. Every country, no matter how small, has a charm of its own (that's what I love about Europe). Bulgaria sucked in every way!

I just like going out with the homies (or by myself sometimes) and doing new spots and seeing new things. Or traveling to other countries and taking in their mentality and lifestyle. I don't really need motivation, because it's always a welcome balance to 'socially accepted work' for me, as well. If I had no responsibilities, I'd live somewhere for 12 months, and then move on again.

What have you gotten out of your 20 years of doing graffiti?

Gotten out? To take where? The other day, a close friend told me that I was kind of retarded, stuck on graffiti. That didn't sound very nice. Well, I've never had anyone tell me that. Nooo, it's still totally socially important that graffiti exists (graffiti: society's mirror, hahaha, sort of like soccer). There is still an great dynamic, people come and go. Every now and then, these unbelievable characters appear (e.g. Bitch, Nerz, etc.) on the scene and completely wreck everything in not time. That's always very nice to watch. At the same time, everything is somehow becoming more accessible, the underground is turning into an open-cast mine. Still, the network has never had deeper roots. Good connections endure and last, even when you're seeing each other every year. Something I never thought possible is that younger writers could influence me. But they do, and I think that's a positive thing. I must have spent my first five years looking up only to the older writers. Today, it's the opposite. What these youngsters are doing always gets me, style and action-wise. Respect! But there are still those graffiti-fossils, whom I look up to.

Never mind, as long as the letters stand!!! And, please, no politics or Street Art!!

Where do you see graffiti 20 years from now?

It will always be around in its original shape and form. The real question is: is there a limit to creativity? I tend to towards a careful 'Yes'.

You seem to have some experience painting trains. Why are there no train flicks in the photos that go with this interview?

I'd like to refer you to an article in Farbsucht's 'Achtung' magazine, issue 3: 'Aesthetics and Illegality' [Ed.: English translation included]... a great read, holding many answers. Props to Nimrod! 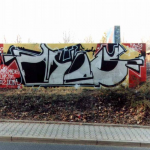 More in our archive 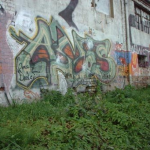